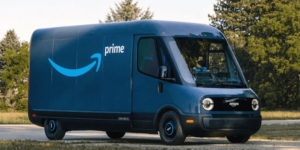 In view of Amazon’s large order for 100,000 electric transporters from US start-up Rivian, there are new details on the vehicle data. The van, designed especially for the online retail giant, is to be built in two equipment lines and three sizes.

This is according to documents that Rivian has submitted to the US authority NHTSA. It is known that Amazon had ordered 100,000 vehicles from Rivian in 2019, and then the startup unveiled the electric delivery truck in October 2020. The vehicle uses Rivian’s skateboard platform, on which the fledgling carmaker’s R1T electric pickup and R1S electric SUV are also based. However, the large order for Amazon has priority: the two own models will only be launched after the Amazon delivery truck.

According to the documents for the NHTSA, Rivian is initially planning two variants of the electric transporter called 500 and 700. The designations pick up on the load volume of the models in cubic feet. These are thus variants with a cargo space of the equivalent of 14.1 and 19.8 cubic metres respectively. A third variant with a load volume of 900 cubic feet (equivalent to 25.5 cubic metres) is to follow at a later date.

The 500 version is planned as both left- and right-hand drive. The document also reveals that the electric transporters will be produced in S (Service) and Z (Amazon) trim levels. US media interpret this to mean that the S model could be planned for fleet customers other than Amazon as soon as their exclusive contract with Rivian ends.

In terms of powertrains, three configurations are listed for the electric van: Front-wheel drive with one or two motors, and a two-motor all-wheel drive. No information has yet been published on the battery capacity. However, the portal Autoblog, citing documents on the manufacturer’s IPO, writes that the two smaller vehicles are designed for a range of 150 miles and the larger model for 120 miles. Converted, that makes 240 and 193 kilometres.

What is known, as mentioned at the outset, is that the van is based on the same skateboard architecture as Rivian’s debut current R1T and R1S, which are designed for private customers. The former is a pickup, the latter an SUV. Autoblog reports that the delivery van for Amazon, however, will come off the assembly line on a separate production line at the Normal plant in the US state of Illinois and, unlike the R1T and R1S, will have a steel vehicle frame rather than an aluminium one. Among the van’s features, the portal lists air-conditioned seats, heated armrests, handles and steps to facilitate entry and exit, a gullwing door on the driver’s side and a range of assistance systems.

A year ago it was still said that the electric vehicle fleet would not be complete until 2030. As Amazon wrote in a blog entry at the time, 10,000 of the electric vans should already be on the road by 2022. Subsequently, slightly more than 10,000 vehicles per year were to be delivered to reach the targeted 100,000 in 2030. It is not known from which source Autoblog has learned about the tightened schedule.