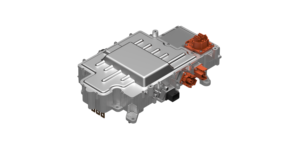 US automotive supplier BorgWarner has won another order to supply its 400-volt silicon carbide inverter for various BEV models from a European OEM, which is not being named. The new customer’s vehicle production with BorgWarner’s SiC inverter is scheduled to start in 2023.

We already know the 400-volt silicon inverter as part of BorgWarner’s iDM integrated drive module, whose customers include Hyundai and an unnamed “leading Chinese luxury electric vehicle brand“. The Americans are not giving any details about the new deal, which only includes the supply of the 400-volt silicon carbide inverter, so the sales volume and order value remain unknown, as does the customer.

Inverters are used to control electric drive motors and are part of power electronics. The BorgWarner device is said to score points with power switches cooled on both sides and, according to BorgWarner, translates into improved driving performance and range. The design of the new SiC inverter builds on BorgWarner’s proven cooling technology to reduce semiconductor area and SiC material, according to Stefan Demmerle, president and general manager of BorgWarner PowerDrive Systems. This results in a lighter and smaller system at a lower cost compared to other silicon-based inverters. According to the manufacturer, the system has a longer service life thanks to the switch design without bonding wires. There is talk of a reduction in switching losses of up to 70 per cent.

BorgWarner recently underlined its ambitions as an eMobility supplier by unveiling a new strategy called “Charging Forward”. This includes an increase in sales of products for electric vehicles to around 45 per cent by 2030 and a commitment to CO2 neutrality by 2035.

In the inverter sector, BorgWarner is already planning the development of a new generation of devices – together with partners and supported by a 5 million dollar grant from the US Department of Energy. The planned SUPER (“Scalable Ultra Power-dense Extended Range”) inverter is designed to enable 800-volt electric vehicles to meet or exceed the Department of Energy’s advertised target of 100 kW per litre power density. In addition, project plans for the inverter call for 100 to 300 kW of power and it will be able to be used either stand-alone or integrated into a drive unit with a motor and transmission.

BorgWarner plans to realise the improved device in a 39-month project together with Infineon Technologies and PolyCharge as well as the National Renewable Energy Laboratory and Virginia Tech. Wolfspeed is on board as the main supplier.

BorgWarner has also announced that it will supply its new 800-volt SiC inverter for the next generation of electric vehicles from a major German carmaker. Again, neither the name of the customer nor details of the delivery are known – not even the start date for the production of vehicles with the 800-volt SiC inverter installed. The US supplier also leaves open whether the product will be the 800-volt power module Viper, which is already on the market, or the aforementioned SUPER inverter (“Scalable Ultra Power-dense Extended Range”), which is only at the beginning of the development phase. However, it can be assumed that the order is aimed at the inverter called Viper, as many descriptions in the press release and in the product profile on the manufacturer’s website sound similar.