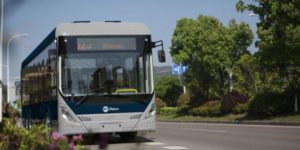 In New Zealand, Auckland Transport and bus operator NZ Bus have reached an agreement to put 152 more battery-electric buses on Auckland’s roads over the next four years. The first of the new electric buses are scheduled to enter service in October 2022.

So far, 33 electric buses are already in operation in Auckland. In February 2020, Auckland Transport and NZ Bus agreed to operate the CityLink bus route only with electric buses with vehicles from the Chinese manufacturer CRRC. The order is part of Auckland’s Low Emission Bus Roadmap announced last year. According to this roadmap, all new buses must be electric from 2025 and the entire fleet of 1360 buses must be fully electric by 2040.

Mayor Phil Goff says: “Having already halted the purchase of new diesel vehicles and rolled out 33 electric buses on more than 13 services throughout the region, this is another step towards a zero-emissions bus fleet for Tāmaki Makaurau. It’s encouraging to see Auckland Transport and NZ Bus working together to make that happen.”

It is not yet clear which manufacturer will be used for the current purchase but a photo published with the press release shows another CRRC bus. These are single-deck buses with a double rear axle, which are currently being tested in the city. What is clear, however, is that Auckland Transport first wants to replace the oldest vehicles in its fleet, which only meet the Euro 3 emissions standard. More modern Euro 6 buses will continue to operate. In the past, Auckland has also purchased buses from ADL, Yutong and BYD.

AT’s Chief Executive, Shane Ellison, says: “We are well on our way in transitioning to an emissions-free public transport fleet by 2040, which will have a myriad of benefits for Tāmaki Makaurau – including improved air quality within the city centre and healthier communities.”

The first electric buses of this order should hit Auckland’s streets in October 2022 on the Tamaki Link route between Glen Innes and downtown Auckland.