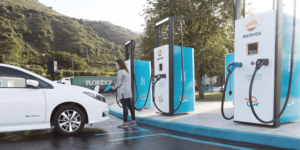 The Spanish oil company Repsol has announced an investment of 42.5 million euros in the installation of 610 fast-charging points at its petrol stations in Spain and Portugal. The Spanish credit institution ICO will subsidise the roll-out with 40.7 million euros.

Specifically, by the end of 2023, a total of 592 charging points, each with a capacity of 50 kW, and 18 HPC connections, each with 180 kW, are planned at 577 Repsol filling stations in Spain and 33 in Portugal. The charging network is to extend along the Mediterranean and Atlantic corridors and will exclusively supply electricity from 100 per cent renewable energies.

According to Repsol, it currently operates a good 350 charging points, including 70 fast-charging stations on the Iberian Peninsula – most of them at petrol stations. By the end of 2022, their number is expected to increase to 1,000. “One every 50 kilometres on the main road corridors in the Iberian Peninsula,” the Group specifies, which has set itself the goal of climate neutrality by 2050. The already existing charging network includes, among others, the first charging station in Spain with energy storage through second-life batteries in the city of Tolosa, as well as the first two ultra-fast charging points at petrol stations in Lopidana and Ugaldebieta, Repsol announces. It also has a fast-charging collaboration with Nissan.

The Spanish Instituto de Crédito Oficial (ICO) is participating (among other things in its role as coordinating body of the EU initiative CEF) with a total amount of 40.7 million euros in two financings in connection with the now publicised expansion project. Repsol says it has also applied for state aid from the MOVES III funding programme.

The Repsol Group claims to have 3,400 petrol stations and 400 natural gas dispensers in Spain alone. In addition to the aforementioned public charging stations, the group claims to have also installed more than 1,000 private charging points at companies and private owners.

Repsol is not the only Spanish petroleum company with eMobility ambitions. Already since 2018, Ionity has been cooperating with Cepsa (Compañía Española de Petróleos) to install up to 100 of its HPC charging points at its petrol stations in Spain and Portugal. Cepsa is a Madrid-based oil company founded in 1929 with a network of 1,800 petrol stations in Spain and Portugal.