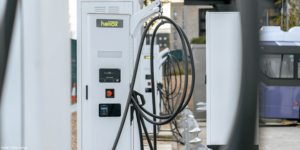 Heliox, a company known for charging equipment for commercial vehicles, is expanding its range of chargers to the passenger car sector with a DC charger.

With the Rapid 50 kW and the Rapid 150 kW Modular, the Dutch charging specialist now offers two solutions for fast charging of passenger cars and light commercial vehicles in public places and on motorways.

Heliox presented the two DC chargers on the sidelines of the COP26 climate conference. With the two products, the Dutch company says it wants to “meet the growing demand for on-the-go charging at petrol stations”. The company’s initial focus will be on Europe.

The ‘Rapid 50kW All-in-One’, as the full name suggests, can be ordered as a typical triple charger with CCS2, CHAdeMO and a Type 2 cable. The AC connection and one of the two DC options can be used simultaneously, CHAdeMO and CCS are not possible in parallel. With the 50 kW charger, Heliox is targeting the retail and hospitality sectors.

The Rapid 150kW Modular is designed as an HPC charging column for public fast charging at motorways and other locations. It is equipped with two CCS cables and has a touch screen and an integrated payment terminal. Helix says that with its modular design, the Rapid 150kW is said to be future-proof, as the charging capacity can “easily” be increased to 300 kW in the future.

Heliox also wants to manufacture the charging columns in Europe to reduce its carbon footprint. After COP26, the Rapid 50kW and Rapid 150kW will also be exhibited at the Nordic EV Summit in Oslo and eMove360 in Munich.

“We need high power charging to become more efficient and easy to scale to meet the growing demand of EVs on the road,” says Michael Coljin, CEO of Heliox Group. “That is why we are proud to present our first EV chargers in the passenger vehicle segment, which we have already implemented in Glasgow to power both First Bus e-buses and passenger vehicles at the Caledonia Bus Depot and plan to push further in Europe,”

Heliox just introduced a depot charging station for electric buses with 180 kW in October. In Germany, the Dutch charging specialist is also involved in the HoLa project for high-performance charging of electric trucks along the A2.