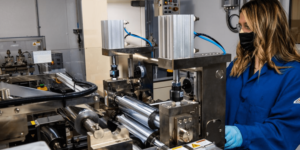 The project has been funded by the Department of Energy’s Vehicle Technologies Office (VTO) as part of $209 million awarded by VTO for advancing electric vehicles, batteries, and connected vehicles. In this second phase, the Battery500 Consortium has the task of meeting Department of Energy performance and cost goals for robust high-energy batteries with up to 500 Wh/kg. The $75 million in funding may be spread over the next five years with $15 million each year subject to appropriations.

In 2016, the Battery500 consortium was founded as one of the Obama Administration’s new initiatives to advance electric vehicle adoption led by Pacific Northwest National Laboratory (PNNL). The consortium was formed with the aim of building a battery pack with a specific energy of 500 watt-hours per kilogram, compared to the 170-200 watt-hours per kilogram possible at the time in typical EV batteries.

In 2017, the consortium awarded $5.7 million in funding to 15 different projects. At this point, researchers focussed on lithium-metal batteries that use lithium instead of graphite for the battery’s negative electrode. The team paired lithium with two different materials for the battery’s positive electrode. While studying these materials, the consortium aimed to prevent unwanted side reactions in the whole battery that weaken a battery’s performance.

The consortium has the key focus of ensuring that the technological solutions it develops are able to meet the needs of automotive and battery manufacturers. For this to be achieved, consortium members have to ensure that significant innovations can be quickly and seamlessly implemented by industry throughout the project.

“Phase 2 will allow us to build on the success of the last five years and provide the leadership necessary for developing the next generation of batteries, which will lead to a North American battery manufacturing and electric vehicle industry,” said M. Stanley Whittingham, who is a distinguished professor of chemistry at Binghamton University and 2019 recipient of the Nobel Prize in chemistry for developing lithium-ion batteries.

John Goodenough, engineering professor at the University of Texas at Austin said: “We have come a long way with fundamental research and development that has led to widespread commercialisation of lithium-ion battery technology. As we proceed with automobile electrification, long driving range between charges with acceptable cycle life is critical.” Goodenough was co-recipient of the Nobel Prize with Whittingham in 2019. “UT Austin is proud of being part of the Battery500 Consortium, which is focused on more than doubling the energy density with long cycle life,” he added.