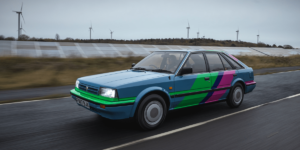 It turns out that the choice of car was quite symbolic for the Sunderland plant. George Kinghorn said: “Given our location so close to the Sunderland plant, working on this Bluebird conversion was a great project to be part of. When Nissan opened the Sunderland factory it gave the North East a big economic boost. The Bluebird was first off the line, so it represents the start of that optimism, progress and global industrial footprint that’s continued to this day.”

Now the vintage 80s car has been brought into the next century. The original Nissan bonnet badge was even given a LED backlight for when the vehicle is static. The converted model is not homologated, but the car’s range is estimated at around 130 miles (210 kilometres) with an acceleration of 0-62mph (0-100kph) in just under 15 seconds. Looks like this old bird aged well with a little bit of motor magic.

Has the Citroën Ami found another friend for adventures?