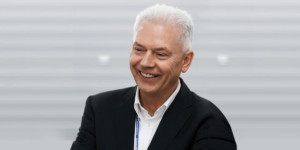 Albert Biermann, head of Hyundai Motor Group’s research and development department, is retiring. Biermann led the development of new Hyundai, Genesis and Kia models and the E-GMP electric platform. His successor has already been named.

Upon announcing his retirement, Hyundai said that Biermann will still remain with the group as a technical advisor. Biermann has been working for Hyundai Motor Group since 2015, initially as Head of Vehicle Test & High Performance Development, and since the end of 2018 he had been Head of Research and Development.

During this time, he had mainly worked from South Korea, but now the German manager will perform his advisory position from Europe. In his role as Executive Technical Advisor, Hyundai says that Biermann will be involved in an advisory capacity in the development of new products and future technologies – this apparently includes the areas of urban air mobility, robotics and hydrogen fuel cells.

Biermann will also support the development of electrification of performance vehicles and is supposed play a key role in talent development by sharing his expertise with Hyundai Motor Europe Technical Center. At least the former is not surprising: before joining Hyundai, Biermann was a chassis developer at BMW, and had held various positions in series development as well as motorsport. At Hyundai, he is considered one of the brains behind the performance brand N – and now wants to electrify this as well. Since the announcement of the 430 kW Kia EV6 GT, there have been rumours of an N version of the Ioniq 5. In its announcement, Hyundai praises the “development of the successful E-GMP platform under Biermann’s leadership,” with which HMG has taken “a leading role in the battery electric vehicle business.” Now, apparently, the two are to be merged.

“It has been a tremendous pleasure and honour for me to work for Hyundai Motor Group and lead our engineering division to become a ‘second-to-none’ R&D center in the entire automotive industry. Now, our vehicles stand out apart from the competition in many aspects and embody our strong engineering expertise and commitment,” said the 65-year old. “Korea will remain as my second home, and all of my colleagues at Hyundai Motor Group will always be considered part of my family. I would like to recognize that our success has always been based on the strong collective spirit of the many talented people at Hyundai and I will value our unique achievements wherever I live.”