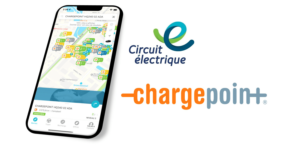 The Electric Circuit network includes nearly 600 fast-charging stations, which all members can now use without the need for a new charge card or contract.

“This new roaming connection demonstrates it once again by giving our members access to the largest network of electric vehicle charging stations in North America, which will help them in their travels outside Quebec,” said France Lampron, Director, Mobility at Hydro-Québec.

Roaming between the two networks is now live, and drivers can find, start and pay for a charge using either the Electric Circuit or ChargePoint mobile apps.

The Electric Circuit is the largest public charging network in the Canadian province of Quebec, which also entertains roaming agreements with the FLO network and New Brunswick’s eCharge network.

The network will reportedly be rolling out 4,500 new standard charging stations by 2028 in partnership with Québec’s municipalities. A grant program is being offered exclusively to municipalities to support this initiative.

In terms of software, the latest roaming integration with ChargePoint is facilitated by a clearinghouse platform developed by Mogile Technologies, also based in Québec.