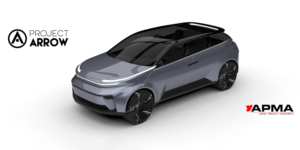 Under the title Project Arrow, Canadian automotive suppliers are planning an electric SUV that will be developed and built entirely in Canada. The first drivable prototype is scheduled for 2023, with series production starting in 2025.

The plan is to produce around 60,000 units per year. Apart from the fact that it is to be purely electric, there are no more detailed details about the drive itself. On some graphics published by the Canadian Automotive Parts Manufacturers Association (APMA), few are surprised to see a battery pack in the underbody. So far, an electric motor is only shown on the front axle, and the charging port appears to be positioned at the rear left. It is not known whether a second electric motor on the rear axle for all-wheel drive is possible.

According to media reports, the vehicle itself is to be positioned between the Tesla Model Y and Model X – i.e. probably over 4.75 metres long. The self-supporting body is to consist of only eight stamped parts and a few magnesium castings.

At first glance, the renderings show an electric SUV with a beefy front, long wheelbase and short overhangs. The special feature only becomes apparent in another picture: the vehicle has four sliding doors: the two in front open to the front, the two in the back slide to the rear. This frees up a large entrance without a B-pillar.

It remains to be seen whether this concept will make it into series production. A concept car with the final design is to be presented in 2022 at the latest, and a drivable prototype is targeted for the CES in January 2023. Series production is planned for 2025.

Project Arrow is backed by the APMA, in which 90 per cent of Canadian automotive suppliers are organised. There is no internationally active car brand in Canada so far, but there are some car plants: US manufacturers operate some production facilities there, and accordingly a supplier industry has emerged in Canada. According to APMA President Flavio Volpe, more than 130 companies have expressed interest in the project.