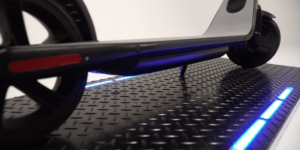 Meredot, a Latvian developer and manufacturer of fast wireless chargers for e-scooters has unveiled its first commercial Wireless Charger. The Wireless Charger is a charging pad that can be placed either above or below the ground.

The Latvian company says that their Wireless Charger pads can potentially serve all popular scooter-sharing brands such as Bird, Lime, Bolt, etc without the need for swapping out batteries. Unlike wireless charging in electric cars, Meredot says that electric scooters using the technology do not require manufacturers to build the technology into the vehicles but that the company will install small devices called “receivers” in the vehicles on-site at the operator.

The pads have initially been conceived for electric share scooters but when electrive talked to Meredot today, they informed us that the current platform can also charge electric moped scooters, food delivery robots and wheelchairs. In the future, the company says that e-bikes will also be chargeable with the Meredot wireless charging pad.

The charging system includes the hardware of the pads themselves and the ‘receiver’ that gets attached to the electric scooters, as well as the software that enables operators to have a full overview of which of their vehicles are charged how much and when.

The technology that the company is using, such as FOD (Foreign Object Detection), LOD (Live Object Detection) and PD (Position Detection) mean that, as Meredot claims, scooters can basically be parked any old how and still be charged correctly at the same speed that they would be charged via cables. The company says that wireless charging technology can work through asphalt, snow or ice. It appears that outdoor temperature is also not a problem: the charging system should be functional at temperatures between –22° to 122°F (–30° to 50°C).

Competition between micro-mobility providers is fierce and all of these are rolling out their own individual infrastructure. The Meredot Wireless Charging system does not need the participation of vehicle manufacturers, nor is it exclusive to any particular type of electric scooter. This means that, theoretically, municipalities or collaborating companies could install the charging pads for use of different operators.

Meredot says that the Wireless Charger is already purchase-ready. The charging system was developed in just six months since Meredot built its first lab prototype. Roman Bysko says that the first customers, City Zone in Israel and Z Move in Italy, were critical to Meredot’s pilot success. These pilot trials “provided valuable real-time insights into the features they needed to optimise their business, headlined by the benefits of wireless charging,” he explained.

“Wireless charging has arrived, bringing new excitement and enthusiasm for the e-mobility industry. With transportation moving from fossil fuels to electricity – and now to wireless electricity – it’s clear that cable charging is becoming obsolete,” says Roman Bysko. “With European Commission and European Innovation Council recognition for its economic and sustainable technology approach, Meredot has become a leader in the fast wireless charging industry. As our global market share grows with the release and installation of our Wireless Chargers worldwide, we intend to become the world’s premiere fast wireless charging provider.”

Voi closes financing round with $115 million