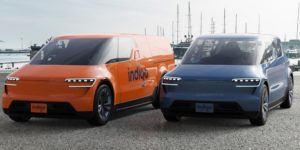 Indigo Technologies has debuted at CES by presenting a van-like electric car in two versions. The Indigo Flow is designed for ridesharing, while the Indigo Flow Plus serves as a delivery van. Executives from Audi and Porsche are on board as well.

For both cars, the startup emphasizes what it calls robotic wheels, which hold a 22 kW electric motor each. They also combine transmission and active suspension in one module with the drive. The active suspension, in particular, is intended to compensate for the well-known disadvantage of wheel hub motors, namely the higher unsprung masses.

With four “robotic wheels”, the system power would be 88 kW. According to Indigo, both the Flow and Flow Plus are expected to get more than 250 miles (400 kilometres) of range from a 40-kWh battery.

While Will Graylin, CEO of Indigo, claimed the company “invented robotic wheels,” the concept is similar to the architecture from Israeli startup Ree Automotive. In both cases, putting motors and electronics inside the wheels (or in the corners) enables a flat platform that helps increase interior space relative to the vehicle’s footprint. In Indigo’s Flow and the more extended Flow Plus, the overhangs are short, and the wheels are placed in the corners of the vehicle.

What is more, Indigo opted for a central driving position, therefore locating the driver’s footwell where a central axle motor would otherwise sit. Since this installation space is free thanks to the wheel hub motors, the driver can be placed further forward, leaving more room at the back.

In the Flow ridesharing model, there is a bench seat with three seats behind the driver and two individual seats behind that. The five passengers can get in and out via sliding doors on both sides. The Flow Plus van has a floor-standing design from the B-pillar upwards; the company is not yet giving details of the cargo space and payload.

These are also still two pure concepts: Indigo Technologies does not provide any information on planned production or a time frame for further development up to series production readiness in the announcement. In August, the Massachusetts-based company presented a smaller three-wheeled electric model that uses robotic wheels.

At CES, the startup also announced three important appointments. First, Volker Kaese, who, as former Audi Head of Innovation Product Management, was involved in the Audi e-tron show car at the time (which has become the e-tron quattro production model), has been hired as Chief Technology Officer; Kaese also worked on the VW XL1 one-litre car. “I am excited to deliver the highest impact on both driver experience and the environment,” said Kaese in vegas. “From the voluminous interior to the sliding doors Indigo Flow will allow drivers to be more efficient at their jobs. Ultimately they will be able to earn more while also doing good for our planet.”

In addition, former Porsche designer Eric Obers (who also worked for Lucid in the interim) and Hugh Robinson have joined Indigo as head of design for the Flow product line. Robinson was formerly employed by Porsche and General Motors.

Indigo Technologies was founded in 2010 by MIT Professor Ian Hunter. In 2020, veteran tech entrepreneur Will Graylin was named CEO to drive the commercialization of the e-vehicles.

Udelv unveils cabless delivery EV – and it is fast (video)