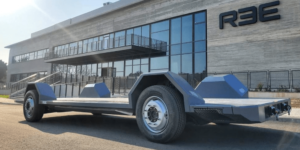 Ree Automotive has begun testing its new P7 modular platform for electric delivery vehicles and walk-in vans in the United States. The Israeli company says it developed P7 based on specifications from one of the world’s largest delivery companies, without disclosing the name.

At CES in Las Vegas, Ree said that the P7 would be designed for US Classes 3 through 5. Classes 3 to 5 fall under medium-duty commercial vehicles from 4.5 to a maximum of 8.8 tons gross vehicle weight. Some US pickups are also in these weight classes.

The P7 is the largest design of the modular E-platform, which is based on specially developed drive modules called Ree Corner. It is a platform in which all critical vehicle components are installed between the chassis and the wheel in the corners of the vehicle. These four compact individual modules – consisting of suspension and drivetrain – ensure a flat interior floor, even between the axles. The low-floor design of the platform is intended to maximize cargo space while maintaining the same footprint. With “volumetric efficiency,” Ree promises its customers higher operating margins.

The smallest version (called P1) can weigh up to 1.8 tons and is intended for inner-city last-mile delivery vehicles. The number corresponds to the respective maximum weight in tons for the P2, P4, P6 and P7 variants. P4 is intended to enable an LCV, e-shuttle or SUV, while P7 was previously announced for a medium-duty delivery truck with a gross vehicle weight of seven tons. According to current specs, Ree won’t quite max out the up to 8.8 tons of the US Class 5 but has increased the gross vehicle weight rating to 7.5 tons.

Ree is not yet giving more details about the vehicles built on the P7. The platform shown in the photos is 7.6 meters long and 2.4 meters wide – this is the maximum configuration. Lengths of between 6.2 and 7.6 meters are possible, widths between 1.6 and 2.4 meters, and Ree specifies a vehicle height of 2.0 to 3.0 meters.

The battery size also depends on the vehicle size; a maximum of 120 kWh is possible. Each “Ree Corner” module can provide up to 100 kW – but front-, rear- and all-wheel drives are possible. In addition, either only the front axle can be steered – since the four modules are identical, all-wheel steering is also possible. The claimed top speed is 130 km/h, the maximum range of 370 miles or just under 600 kilometres.

Importantly for logistics customers, the maximum payload is 8,800 pounds or four tons, and the total cargo volume is 39.6 cubic meters, according to the company. In addition, the cargo floor is at least 50.8 centimetres above the road. The platform also offers Data-as-a-Service, intended to give fleet managers “complete visibility and insight into their fleet operations.”

On the road to production, Ree had entered into development cooperation with US supplier American Axle & Manufacturing (AAM) as reported last year.