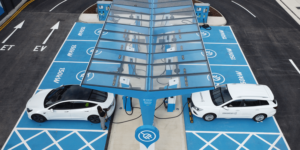 The British petrol station operator Motor Fuel Group (MFG) has announced investments of 50 million pounds in the expansion of its charging infrastructure for the current year. This will involve installing more than 350 150-kW high power chargers (HPC) for electric cars at 60 locations across the UK.

According to the company, the new EV hubs will consist of four to eight 150-kW charging points per site, which are expected to provide an additional 100 miles or 160 kilometres of range in ten minutes, depending on the vehicle. The company says that the locations may be supplemented with 300-kW+ charging points as battery technology improves accordingly.

In addition to the 60 new EV hubs, MFG plans to add power to an additional 20 sites completed in the final months of last year in the first quarter of 2022.

The newly announced investment builds on the £40 million investment in 2021, which MFG said significantly expanded the national charging infrastructure, opening its “flagship charging station in Putney” and the first ultra-rapid EV-only site in the North West of England in Manchester. The company invested an additional £50 million (58 million euros) in its sites to expand its shopping offer and to-go food business.

MFG finances, builds and operates the charging hubs at its petrol stations itself, according to information from last year. MFG says, although it is only in its first year as a charging point operator, it is already planning further investments.

MFG says its network has been voted the most popular new network and second most popular overall in the Zap Map user rating for public e-charging networks in the UK in a survey by Zap Map, a platform for e-drivers. It had received an overall rating of 4.2/5.

TSG to provide depot charging for Ford E-Transit in Europe