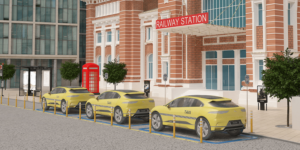 The US developer Momentum Dynamics, which specialises in inductive charging systems for electric vehicles, is expanding its focus to the passenger car sector. So far, the company has concentrated mainly on wireless charging for electric buses and trucks. In addition, the company also plans to expand geographically.

According to Momentum Dynamics, it is currently pushing ahead with “a rapidly growing portfolio of successful high-performance inductive EV charging projects” in the USA. In Europe, the company is involved in a project in Oslo, among others. The American company justifies the expansion of activities to the passenger car sector “in response to accelerating global customer demand for automatic wireless charging of private passenger cars, particularly in luxury segments and high utilization taxi operations, Momentum is expanding its global footprint and product offerings”. In addition, the need for emerging autonomous vehicles is growing. However, Momentum Dynamics does not go into details about the expansion of its product offering in its accompanying statement.

In terms of geographic expansion into Europe and the Middle East, the company announces that it has appointed John Holland as its new commercial director for these two territories. He previously led Jaguar Land Rover’s partnership with Waymo, Google’s autonomous driving company. At Momentum, the manager is expected to expand the company’s wireless charging business outside the US and forge new partnerships in the passenger car sector.

Momentum Dynamics’ wireless charging technology is being tested in the US in cooperation with GreenPower and the Washington transit authority Link Transit, among others. In April 2018, the latter transit authority had put the first wireless charging system for electric buses with a charging capacity of 200 kW into operation. Subsequently, Link Transit also ordered systems with up to 300 kW charging capacity.

In the Oslo project for inductive charging of electric taxis, the charging power is nowhere near as high. There, they are talking about charging plates that are supposed to have an output of 50 to 75 kW. With a standing time of six to eight minutes and an average charging power of 50 kW, between 5 and 6.5 kWh are recharged – which is sufficient for short taxi trips within the city centre. Each time the taxi returns to the taxi stand, some electricity is recharged.

BMW invests in smart charging that relies only on Bluetooth