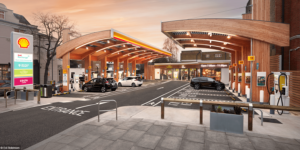 Shell has now officially opened a very special fast-charging park in the London borough of Fulham. The location is a former petrol station that has been converted to exclusively offering charging power for electric cars and vans.

Nine 175 kW charging points have been installed at the Shell Fulham filling station. The repurposed station is now home to a seating area for drivers to stay while charging, free Wi-Fi, a café and a shop.

Judging by the photos made available by Shell, the charging points have been supplied by the Australian manufacturer Tritium. Just last month, Shell and Tritium signed a new global framework agreement for the supply of DC chargers. At the time, it was said that Tritium’s DC charging columns for Shell would be used in Europe, South Africa, Asia, the Middle East and North America.

The site was converted more extensively than simply switching charging columns in place of petrol pumps. For the “sustainable design”, for example, Shell has replaced the roof with a modern wooden construction with solar panels integrated onto the roof. The shop’s display windows have double glazing with high insulating properties.

“EV drivers are looking for a charging experience that is as fast, convenient and comfortable as possible. This is exactly what Shell Fulham aims to offer,” said István Kapitány, Global Executive Vice President for Mobility at Shell. Speaking at the opening, Transport Minister Trudy Harrison said, “With more people than ever switching to electric vehicles, this is exactly the type of facility we need to make the switch as easy as possible for drivers across the country.”

Qualiconsult to get charged by Renault’s Mobilize