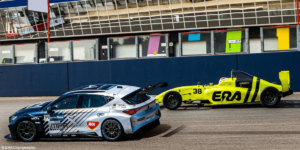 As part of the supporting programme of the Pure ETCR electric touring car series, an electric junior racing series for young male and female racers will compete for the first time this year. The races will be run with a standard car.

For the premiere season of the ERA Championship – ERA stands for Electric Racing Academy – ten races at five venues are on the racing calendar between May and July 2022. That’s one race weekend less than the ETCR: the ERA will make a demo appearance at the season opener in Pau, France, at the beginning of May, but will not have an official classification race. The first ERA race will then take place at the second ETCR event in Istanbul (20-22 May).

While the ETCR cars are touring cars with the look of road cars, the ERA uses a formula racing car. The cars to be raced are the Mitsu-Bachi F110e with 130 kW of power and a 24-kWh battery. The electric single-seater is expected to reach top speeds of around 210 km/h.

A race weekend includes a free practice session, two qualifying sessions and two sprint races, with ten drivers competing in each. Apart from the street circuit in Istanbul, the other weekends take place on permanent race tracks.

“From the outset, we have had a very clear shared aim to promote electric racing and offer exciting, accessible electric motorsport for teams, drivers and fans,” says Beth Georgiou, ERA Sporting Director. “We have seen the phenomenal success of electric racing in recent years and if you look at the opportunities now for drivers to develop a professional career, it is clear that electric racing is an increasingly attractive option and we only see that going in one direction.”

The racing series has also already agreed on a TV deal: On Tuesday after the race weekend, a summary of the races will be broadcast on Eurosport in over 70 countries.