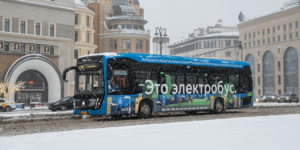 The Moscow city government plans to procure another 500 electric buses in 2022, according to Mosgortrans, who operates buses and trams in the Russian capital. Moscow already runs 1,000 electric buses, and the city targets having a 100% electric bus fleet by 2030.

Mosgortrans says the 1,000 electric buses currently running on 66 routes in Moscow comprise one of the largest zero-emission fleets in Europe and America. “In December, Moscow has received the 1000th electric bus assembled by the Russian manufacturer Kamaz,” said Maksim Liksutov, the Deputy Mayor of Moscow for Transport. He added that Moscow planned to purchase 500 more eco-friendly buses this year, which is slightly up from previous announcements. Mosgortrans initially scheduled 420 vehicles.

For the new 500 buses for 2022, the city government said it would use funds from green bonds. The latter is a fixed-income instrument, i.e. a bond issued by the government in this case, which provides investors with a return in the form of fixed periodic payments and the eventual return of principal at maturity. Mosgortrans says the green bonds in Russia were specifically earmarked to raise money for climate and environmental projects. The surface public transport operator added that nearly half of the Moscow electric bus fleet have been financed by green bonds.

“Nowadays, green bonds are in high demand in Russia. All funds from this project will be used to purchase electric buses and the construction of new metro stations,” said Vladimir Efimov, the Deputy Mayor of Moscow for Economic Policy and Property and Land Relations.

As reported, Mosgortrans aims to convert Moscow’s entire bus fleet to electric by 2030. In the nearer term, the operator will buy and take into service 2,000 electric buses and install over 500 charging stations by 2023.

At present, Mosgortrans claims the existing electric bus fleet has run 60 million kilometres and carried more than 156 million passengers. So far, there are 168 charging depots in Moscow, with another 115 to be integrated next year.

As with previous announcements, the latest release does not disclose details on pricing or the vehicle type. Until now, Mosgortrans has relied on GAZ and Kamaz for electric city buses and calls the model the “Moscow electric bus”. Kamaz has opened a dedicated electric bus plant last April, located at the Sokolniki Auto Repair and Construction Plant (SVARZ), a branch of Mosgortrans in Moscow. The Kamaz plant can produce 500 electric buses a year and plans include another production building to increase annual output by 200 electric buses.

Mosgortrans claims the vehicles manufactured in SVARZ were up there with the international competition in terms of technical and operational characteristics. “And this while it is 30% cheaper than models of electric buses made by other world manufacturers, e.g. Polish and German companies.”