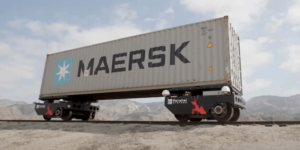 Parallel Systems, a company founded by former SpaceX engineers to reimagine the railroad system, has raised $49.55 million in Series A funds to build autonomous battery-electric rail vehicles that move freight.

The funds have been raised for the purpose of building a fleet of rail vehicles, executing advanced testing programs and growing the team. The company has already raised $53.15 in previous rounds, including $3.6 million in seed funds.

The team today announced they were coming out of “stealth mode” and are now revealing a lot of information about the company Parallel System and their solution – which looks like it will definitely make waves if it can deliver on the promises the company describes.

The lack of the need for a locomotive has quite a number of different advantages. It seems the design has really maximised on the advantages of both established old technology – in that it uses existing railway tracks and containers – as well as new and innovative technology, meaning electric drive systems, autonomous driving technology and IoT to coordinate the logistics of what is going where and when.

The Parallel System has a few rather spectacular data sets. The fact that a shipping container with these self-powered, autonomous wheel systems can travel up to 500 miles (around 800 kilometres) is great, but if the system uses only 25% of the energy of a semi-truck, that is indeed a breakthrough. Similarly, the claimed charging time of less than one hour makes this a significant solution. Also impressive is the payload capacity: Up to 128,000 lbs. / 58,000 kg. (in a double stack container formation), which Parallel says is 2.8 times more than a semi–truck.

Another advantage over traditional train systems is that freight trains would not need to be so long. Long trains require a lot of loading time and also mean that traffic has to wait for a while for large trains to pass. With Parallel Systems, a longer platoon can even split up to allow better traffic flow – which should be easily monitored with the right exchange of information.

As regards to the safety of these unmanned, self-powered, autonomous mobile shipping containers, the company claims that a single container on the Parallel System travelling on its own can come to a complete halt safely and autonomously up to 10 times quicker than a train. This would presumably change depending on the size of any given platoon.

As with other autonomous applications, the Parallel System also uses camera-based perception and redundant braking. The company says that the vehicles can make an emergency stop within the line of sight that the sensors perceive an object. Track conditions can be taken into account and the speed of the platoons or individual containers changed accordingly.

The timing of this solution couldn’t be better – of course as long as it delivers on the claims made. Governments, especially in high-emitting Western countries, are trying to find solutions to reducing emissions while maintaining services. Here in Germany, the government is trying to reduce emissions by transferring more freight to rail. With the current global pandemic, most of us have become more aware of numerous supply chains issues, among others, such as a lack of truck and locomotive drivers. According to Parallel, the US rail system network is only ever 3 per cent occupied by active trains at any given time. Parallel claims to have developed a system that can bring more business to rail, by not only improving the unit economics over shorter distances, and optimising rail use at any given time.

Matt Soule says: “Our business model is to give railroads the tools to convert some of the $700 billion U.S. trucking industry to rail. The Parallel system can also help alleviate the supply chain crisis by enabling low cost and regular movement of freight in and out of ports.”

Parallel is looking to expand its engineering team by about 60 software engineers, as Soul told TechCrunch. So far, the company has yet to test on US networks, which is apparently difficult in the US because it is privately owned by owner-operators. This poses a challenge for Parallel to test its vehicles and the autonomous systems running the vehicles on a large scale. So far the California-based company has been testing its prototype vehicle on a small rail in Los Angeles, insulated from national networks.

This latest round of funding is led by Anthos Capital, and includes investments from Congruent Ventures, Riot Ventures, Embark Ventures, and others.