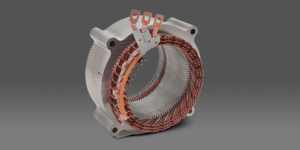 General Motors is investing almost 154 million US dollars in its Lockport Components plant in western New York to produce components for electric motors in the future. Investments are also to be made in two locations in the state of Michigan.

The investment in the New York plant involves the production of a stator module for electric motors. The plant is to be renovated and new production machinery purchased with the equivalent of around 136 million euros. According to GM, the refurbishment is to start immediately. The announcement does not mention by when the refurbishment is expected to be completed.

The stator is intended for use in the larger Ultium models, GM is talking about SUVs and electric pickups. Specific models are not mentioned, but the GMC Hummer EV, the Chevrolet Silverado EV and the Cadillac Lyriq are based on the Ultium platform.

In addition to the stators, Lockport Components also continues to produce components for the combustion models, such as radiators, capacitors and heating elements. Depending on demand, up to 230 new jobs will be created at the components plant between 2023 and 2026.

“GM’s investment in Lockport Components reaffirms our commitment to manufacturing in Western New York and our confidence in this team. They will build a crucial module in our electric motor assembly for our future electric trucks and SUVs,” said Gerald Johnson, GM executive vice president of global manufacturing and sustainability.

But further investments are apparently also being prepared in Michigan. According to a report in the Detroit News, GM will unveil detailed plans on Tuesday to invest $6.5 billion in two Michigan sites for electric vehicle and battery production. Four billion dollars will go towards expanding the Orion Township assembly plant to produce more electric vehicles, for which GM recently received a tax break. Another $2.5 billion is planned for a new Ultium Cells battery plant in Lansing. A total of about 4,000 jobs are to be created at both locations.