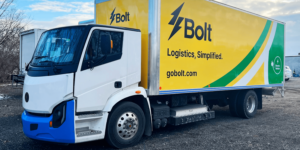 In Canada, Ikea has partnered with Bolt Logistics to deploy another 30 electric delivery trucks this year. Ten have already joined an existing fleet of 15 ZEVs. The partnership reaches back to 2021 when Bolt was called Second Closet.

While not stated in today’s communications, previous orders with Bolt saw Ikea Canada receive vehicles from Quebec-based Lion Electric and the press pictures show such trucks again. The new order is also another step for the furniture company to achieve 100% zero-emission deliveries in Canada by 2025.

“With transportation being one of the largest contributors of the global climate crisis, IKEA Canada is committed to eradicating carbon emissions and electrifying its last-mile delivery service, utilizing the benefits of electric vehicles to further transform the market,” said Melissa Barbosa, Head of Sustainability at IKEA Canada.

Bolt, too, is on a mission to be carbon negative by 2023. The Toronto-based company added today’s deal marked one of Canada’s largest orders of zero-emission delivery vehicles to date. Founded in 2017, Bolt calls itself an e-commerce fulfilment and last-mile delivery provider for businesses of all sizes.

For Ikea, the company has already deployed the first ten trucks of the new order and expects to add the remaining 20 in British Columbia, Quebec, and Ontario in the first half of the year.

As in other markets, Ikea has installed EV chargers in all Canadian locations to halve relative emissions from its employees and customers by 2030.

For deliveries, the Swedish company has made similar deals to the one with Bolt with Lightning Motors in New York or BYD and TDS in Amsterdam.

Bolt Logistics has undergone another name change and is now called GoBolt. The announcement comes on the heels of the news that the Canada-based business expands into the US market, where GoBolt works with Rove Concepts. The new partners say they reach 12.75 million households across the US with an electric vehicle.

GoBolt raised CAD $115 million ($92.3 million USD) in Series B financing in November 2021. Led by Yaletown Partners with participation from Ingka Investments – one of the three core businesses of Ingka Group, the largest owner and operator of IKEA Retail.