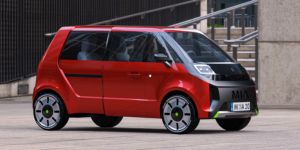 Fox E-Mobility has taken another step towards the start of production and has completed the overall design of its new Mia electric car series. The first prototypes are planned for the current year. Series production in cooperation with a vehicle manufacturer is scheduled to start in 2024.

The board gave its final blessing to the new interior and exterior design, which was created under the leadership of automotive designer Murat Günak, according to a press release. Internally, the new vehicle model is called Mia 2.0 and is a further development of the predecessor model Mia 1.0 from 2012, which was also designed by Günak.

The new Mia model has a length of 3.2 metres, weighs less than 1,000 kilograms and has a load volume of 1,500 litres. The company specifies a range of 200 kilometres; a second, optional battery, which can also be retrofitted, doubles the range to 400 kilometres. The company does not give any further technical details in the press release, nor does it state who will be the vehicle manufacturer for the start of production. According to the company, Mia is the only electric car project that will be financed and developed exclusively in Europe and built in Europe with European partners.

Fox E-Mobility locates the vehicle as an ideal solution for commercial mobility needs in urban areas – citing delivery services and passenger vehicles as potential users. The price will be “well below 20,000 euros”, the company says.

Fox E-Mobility presented the concept for the Mia 2.0 in August last year. The integrated ‘skateboard’ mini kit allows for several derivatives of the Mia product family such as shorter or longer models for three or four passengers or small vans with 1,500 litres of space.

Fox E-Mobility had taken over the rights to the Mia in December 2020 and announced at the time a production start for the first quarter of 2023. As mentioned above, the compact model is based on the Mia 1.0, which was already introduced around ten years ago, but was to be equipped with “state-of-the-art battery technology and the latest drive systems”. Features such as the central driving position and the compact exterior dimensions with the largest possible interior space were to be retained.

As part of the revival of the model, Fox E-Mobility announced a cooperation with the Slovakian battery company InoBat Auto last June. The two companies had signed a memorandum of understanding for extensive cooperation on the development, production and battery design for the Mia 2.0.

The failed manufacturer of the Mia 2.0 named Fox Automotive Switzerland AG was acquired by Catinum AG in the course of a “reverse IPO”, i.e. it had already discontinued its operative business beforehand and only acted as a so-called shell company. The general meeting of Catinum AG decided on the takeover in the form of a capital increase against contribution in kind with a volume of 69.6 million euros. The name of Catinum AG was simultaneously changed to Fox E-Mobility AG. The company is listed on several stock exchanges in Germany.

The German-based AG stated in December 2020 that it intended to focus on the European development and production of battery-electric vehicles in the low-price segment for all major European markets. At the time, Philippe Perret (CEO), Ulrich Hoernke (CFO) and Christian Jung (CTO) took over the management.

There has been a change in the management a few days ago. For personal reasons, according to the company, Ulrich Hörnke resigned from his position as CEO of Fox E-Mobility. Chairman Philippe Perret will thus lead the company as CEO and CFO together with Christian Jung as Chief Technical Officer. Hörnke will continue to be available to the company as an advisor.

Volkswagen ID.5 & ID.4 Pro available to order in the UK

Mercedes is restructuring its development department