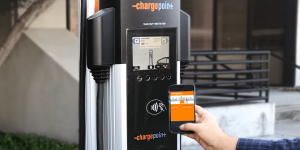 Charging infrastructure provider ChargePoint has entered into a strategic partnership in France with electronics wholesaler Sonepar. The agreement calls for the installation of more than 1,400 publicly charging stations at over 500 Sonepar locations in France.

What stands out in the announcement is not only the size of the charging network but the timeline: ChargePoint wants the charging stations to be up and running as early as mid-2022. However, the partners do not mention whether the charging points will be exclusively AC or DC.

What is clear is that ChargePoint will be the operator and the software partner and supply all the charging hardware. According to its homepage, in addition to charging points from some third-party providers, ChargePoint has two of its own AC charging stations on offer with the CP4100 and CP4300 and DC stations with the Express 250 and Express Plus, which offer up to 350 kW per charging point.

As the charging points in the parking lots will also be publicly accessible, the agreement also has a notable impact on the public charging infrastructure across France. According to the ChargePoint announcement, as of 31 December 2021, there were 53,667 publicly accessible charging stations across the country. Once the 1,400 charging stations are installed, the charging station network in France will grow by 2.6 per cent.
“Sonepar’ss French network represents a major opportunity to make a significant contribution to achievingFrance’ss national in terms of electric charging station capacity” Jérôme Malassigne, President Sonepar France and Sonepar International Services.”This sustainable service available 24/7 will significantly reduce carbon emissions.”

Sonepar also committed to having a 25% battery EV and 75% plug-in hybrid share in its corporate fleet by 2023, with a move to 50-50 by 2025.
“We have an established partnership agreement with the Sonepar Group globally, and we are thrilled to extend EV charging in France with our partner Sonepar” ChargePoint’ss CEO, Pasquale Romano, added.”This partnership indicates the commitment between ChargePoint and Sonepar to drive the future of transportation and progress the electrification efforts of thousands of businesses throughout France.”

The US company ChargePoint noticeably intensified its activities in Europe last year. In July 2021, it announced the acquisition of Austrian charging software specialist has-to-be. A month later, the acquisition of e-bus and commercial vehicle management provider ViriCiti was announced as reported.

ChargePoint has been trading on the New York Stock Exchange (NYSE) under the ticker symbol “CHPT” since September 2020.

Including reporting by Sebastian Schaal.