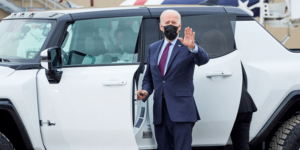 After being accused of ignoring Tesla for months in his speeches about electric vehicles, while praising General Motors and Ford, US President Joe Biden has now mentioned the Californian EV manufacturer by name for the first time in a public speech as “the largest electric car manufacturer in our country”.

Taycan sets a charging record in the USA