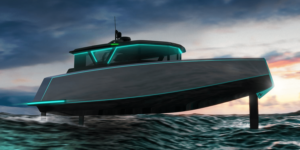 The Californian startup Navier develops electric hydrofoils. Now the company has reached an important step: In a seed financing round, Navier was able to raise 7.2 million dollars.

With the seed capital of the equivalent of 6.3 million euros, the company plans to build the N27, Navier’s first model. The N27 was introduced last year, and the 15 units planned for the first year of production were (pre-) sold within two months. Currently, the first two hulls are being built by a boat builder in the US state of Maine. The unit price is around 300,000 dollars; the N27 can travel up to 75 nautical miles at 20 knots.

Navier is not alone with the idea of an electric hydrofoil; the Swedish company Candela has been selling such vehicles for several years. The hydrofoils raise the boat’s hull out of the water during the journey, which reduces the contact surface with the water and thus the resistance enormously. According to Navier, this should reduce operating costs by 90 per cent.

“Navier is much more than an electric upgrade. We are fundamentally rethinking the boat as we know it,” says co-founder and CEO Sampriti Bhattacharyya. “Hydrofoils not only allow electric boats to attain a practical range at high speeds, but they drastically reduce the operational cost of a vessel by a factor of 10X when compared to traditional boats with combustion engines.”

Navier was founded by two MIT graduates and is based in California’s Bay Area. As with many US startups, Navier’s focus goes beyond building expensive goods for private customers: with low-cost, autonomously driving passenger boats, Navier aims to help solve the traffic problems of major US coastal cities such as San Francisco, New York, Miami and Seattle.

“Human civilization was historically built around our waterways, and today 46% of the world lives in coastal cities that are heavily congested,” says Bhattacharyya. “If we can build a zero-emission marine craft that competes in cost, speed and convenience to land-borne options, we will open up a whole new mode of clean, scalable transportation for coastal cities that was never possible before, and without the need for cost-prohibitive infrastructure such as bridges and tunnels.”

In the shorter term, Navier’s goals are anchored differently: after the first 15 N27s, the company expects production to increase to 400 units by 2024.