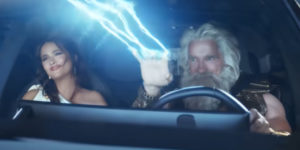 BMW will air a 60-second commercial during the Super Bowl next Sunday for its electric iX, slated to launch in the US next month. Arnold Schwarzenegger stars as the Greek god Zeus and Salma Hayek Pinault as his consort, the goddess Hera. The spot is already available online.

Conceived by Goodby Silverstein & Partners and directed by Bryan Buckley, the 60-second spot will air during the third commercial break of the first quarter. Schwarzenegger stars as Zeus, the Greek god of lightning, and Hayek Pinault plays his wife, the goddess Hera, as they retire from Mt. Olympus to a quiet life in Palm Springs, California. However, the monotony of retirement quickly weighs on Zeus, who becomes frustrated by his struggles with earthly electronics and his nagging mortal neighbors’ constant requests to charge their electric golf carts and hedge trimmers. Meanwhile, Hera, the hero of the story, has fully acclimated and is thriving in retirement. In an effort to bring some excitement back into Zeus’s life, she gifts him with an all-electric BMW iX.