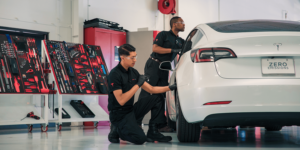 Tesla is facing serious allegations of systematic racial discrimination. A racist work environment prevails at the Tesla factory in Fremont, according to the California Fair Employment and Housing Authority (DEFH), which has now filed a lawsuit against the carmaker.

The lawsuit alleges that “Tesla’s brand, purportedly highlighting a socially conscious future, masks the reality of a company that profits from an army of production workers, many of whom are people of color, working under egregious conditions”, both in terms of physical labour, as well as treatment by other employees. The filing continues: “As early as 2012, Black and/or African American Tesla workers have complained that Tesla production leads, supervisors, and managers constantly use the n-word and other racial slurs to refer to Black workers. They have complained that swastikas, “KKK,” the n-word, and other racist writing are etched onto walls of restrooms, restroom stalls, lunch tables, and even factory machinery.”

Tesla has responded with a blog post, stating that “Tesla strongly opposes all forms of discrimination and harassment and has a dedicated Employee Relations team that responds to and investigates all complaints.” The company refers to a dedicated “Diversity, Equity, and Inclusion team” as well as strict punishment for such behaviour: “Tesla has always disciplined and terminated employees who engage in misconduct, including those who use racial slurs or harass others in different ways.”

Tesla then goes as far as to say that the claim is bogus: “Over the past five years, the DFEH has been asked on almost 50 occasions by individuals who believe they were discriminated against or harassed to investigate Tesla. On every single occasion, when the DFEH closed an investigation, it did not find misconduct against Tesla. It therefore strains credibility for the agency to now allege, after a three-year investigation, that systematic racial discrimination and harassment somehow existed at Tesla.”

Toyota wants to bring back the gear shift