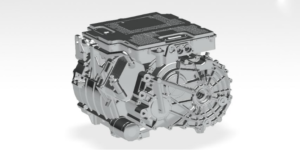 US automotive supplier BorgWarner has announced further orders for electric vehicles. Among them is an order from a Chinese luxury electric car brand for a complete 800-volt drive system, but also an interesting order for an electric truck component. The US supplier also announced that it will acquire Santroll Automotive Components in China.

Firstly to the drive system, for which BorgWarner says it has signed an agreement with a Chinese luxury brand that remains unnamed to supply its new integrated drive module (iDM) for the company’s electric cars. The 800V iDM features an electric motor as well as an 800-volt silicon carbide inverter.

The 800V iDM220 covers the power range from 160 to 300 kW. BorgWarner has not said what power the customer’s electric car will have, as this also depends on the performance of the installed battery. What is certain, however, is that this is BorgWarner’s first 800V iDM project worldwide. Production is expected to start in 2023.

The other tidbit that was revealed about BorgWarner’s mystery customer is that the Chinese luxury electric car brand is already an existing customer. “We are pleased to continue our long-standing partnership with this leading domestic manufacturer of luxury electric vehicles,” said Dr Stefan Demmerle, President and General Manager, BorgWarner PowerDrive Systems. “The 800V iDM generates a higher power density and system efficiency, thus creating mobility solutions with better driving performance, and longer range for OEMs, like our valued customers in China.”

It is also not the first order for the iDM220 from China since BorgWarner already announced a corresponding deal with a new customer in August 2021, but at that time it was for the 400-volt version.

In addition to the 800-volt order, BorgWarner has received the first order for its high-voltage eFan. The 40 kW system consists of a fan, electric motor and inverter and will be installed in battery-electric heavy-duty and long-haul trucks. The order comes from a major European OEM, which, as is often the case with supplier announcements, is not named – especially if the vehicle is not yet on the market. In this case, the electric truck with the high-voltage eFan is scheduled for market launch at the end of 2024.

Developers of electric trucks have faced a major challenge so far, as special components such as fans and air-conditioning compressors have not been available with the usual truck requirements. The components available on the market so far were designed for the running times of passenger cars, which are stationary for an average of 23 hours a day. A truck is on the road many hours a day and thus has many more operating hours per year. In view of these operating times, components designed according to passenger car standards would wear out too quickly – be it the compressor for the cab air conditioning system or, as in the case of the high-voltage eFan, the thermal management system for the battery.

According to BorgWarner, the system is fully encapsulated for reliable long-term operation and optimised for speeds below 3,000 rpm. With an operating range of 650 to 850 volts, the eFan is said to be compatible with a wide range of high-voltage onboard networks in commercial vehicles.

Only yesterday, BorgWarner revealed that it had received an order from BMW for its high-voltage coolant heater (HVCH) for use in the i4 and iX. The HVCH from BorgWarner regulates the interior heating and takes over the thermal management of the battery – and is thus an important component for the charging behaviour of the vehicles at lower outside temperatures.

BorgWarner says that, with nearly 400 full–time employees, Santroll brings manufacturing equipment design capabilities and proven automation expertise. This should BorgWarner to “secure business relationships with many leading customers in China.” The acquisition is expected to strengthen BorgWarner’s vertical integration, scale and portfolio breadth in light vehicle electric motors while enabling faster time to market. Closing is expected by the end of the first quarter of 2022. The purchase price is the equivalent of around ten million euros.

BorgWarner has completed the acquisition of the electric motor business of Chinese company Santroll, announced above. The company says that the acquisition will strengthen BorgWarner’s vertical integration and expand its portfolio in the area of electric motors for passenger cars. At the same time, it will enable faster time-to-market. “We are pleased to complete our acquisition of Santroll and welcome Santroll’s talented employees in China to BorgWarner,” said Frédéric Lissalde, President and CEO, BorgWarner.

Nio announces next model for 2022 with the ES7