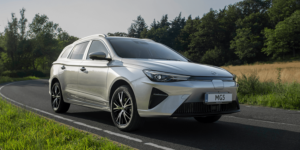 The British SAIC brand MG Motor has announced the market launch of its MG5 Electric station wagon in continental Europe in March. While UK prices are yet unknown, German prices will start at 38,490 euros. A cheaper base model is to follow later.

The SAIC brand had already presented some of the MG5 Electric’s technical specifications last year. At market launch, the MG5 Electric will be available with a 61.1 kWh battery and a WLTP range of 400 kilometres in combination with a 115 kW motor driving the front wheels. This is the so-called ‘Maximum’ model.

The standard version with a 50.3 kWh battery for a WLTP range of 320 kilometres and a 130 kW electric motor will follow at a later date – this is an LFP battery, which is also offered in the revised ZS EV. With this powertrain, the MG5 Electric starts at prices starting at 35,490 euros in Germany. However, MG has not revealed when this version will hit the market.

The AC charging power is 11 kW regardless of the installed battery. In addition, both batteries are capable of charging with up to 87 kW at a DC pillar. The charging process from five to 80 per cent takes around 40 minutes – which corresponds to an average charging power of 69 kW for the large battery. The charging port is located in the centre of the revised front.

Both drive versions are available in two trim levels, and the prices quoted apply to the base model called ‘Comfort’. The better-equipped ‘Luxury’ variant costs 1,500 euros more and offers such features as automatic climate control, 360-degree camera and 17-inch wheels. For the ‘Luxury’ variant, customers can order a grey interior for 1,000 euros, and a different paint finish to ‘Dover White’ costs 650 euros.

The 4.60-meter-long station wagon offers 479 litres of storage space, which can be expanded to 1,367 litres with the rear seats folded down (60/40) – previously there was talk of a maximum of 1,400 litres. There is also a trailer hitch with a maximum towing capacity of 500 kilograms and 50 kilograms of drawbar load. The roof load is 75 kilograms.

“With the new MG5 Electric, we introduce a next-generation battery electric vehicle that meet the demands of the most discerning European motorists,” said Matt Lei, CEO MG Motor Europe. “Such as an attractive range, fast charging capability, advanced safety features and smart pricing. In addition, the MG5 Electric is particularly modern and attractively designed.”

Genesis to bring the GV60 to Europe this year

Polestar 5 to use bonded alumium chassis