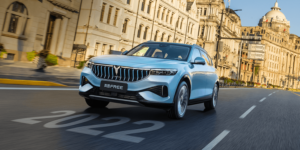 The Dongfeng brand Voyah has announced its intention to deliver the first electric cars in Europe this year. The market launch is planned with the electric SUV ‘Free’ in Norway, with other countries and models to follow later.

Voyah is a very young brand; the premium offshoot of the carmaker Dongfeng delivered its first vehicles in China in August 2021. By the end of the year, 6,791 electric cars had been handed over to customers, 3,330 of them in December alone. Towards the end of the year, Voyah was able to increase production noticeably. On 21 January, the 10,000th Voyah vehicle was built.

As Voyah has now announced, sales of the electric SUV ‘Free’ are to start in Norway in June, with the first European deliveries planned for the fourth quarter of 2022. In June, the first Voyah showroom outside China will be opened, with a location planned in the centre of Oslo.

The Voyah Free is a 4.90-metre-long electric SUV that is offered with three drive options. The rear-wheel-drive version has an output of 255 kW and an NEDC range of 505 kilometres with the 88 kWh battery. The all-wheel-drive model produces 510 kW and uses the same battery for 475 kilometres. In addition, a version with a 33 kWh battery and a 1.5-litre range extender is available in China – for an NEDC range of 860 kilometres, 140 of which are electric. It is not clear from the company’s announcement whether this variant will also be offered in Norway.

The ‘Free’ model is to be followed by a large van called ‘Dreamer’ in China in mid-2022. The ‘Dreamer’ is over 5.30 metres long and has a wheelbase of 3.20 metres. A sedan, of which prototypes have already been photographed, is to be launched in China in 2023. At present, the sedan is still called the H53.

Nissan is investing in EV production in the USA