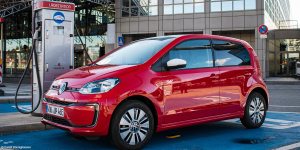 It had been indicated for a few weeks; now the time has come: Volkswagen is once again taking orders for the electric small car e-Up. The Style ‘Plus’ variant is available at prices starting at 26,895 euros.

Rumours of a comeback of the long-sold-out e-Up had circulated since mid-January, citing a dealer letter. The day after, a VW spokesperson confirmed the information that the small car would be available for order again, “probably from mid-February” – with 18 February being the date.

VW had imposed an order freeze for the e-Up in 2020. With the increased environmental bonus and later the introduction of the innovation premium as part of the Corona stimulus package, demand for the small electric car had skyrocketed – thanks to the high subsidy, the otherwise expensive electric version was very attractively priced. Since the e-Up on the old combustion engine basis was not designed for such demand and VW was probably threatened with a minus business due to the 3,000 euro manufacturer’s share, they soon accepted no more new orders.

Due to the high order backlog, the e-Up was in second place in the German KBA statistics for EV registrations in 2021 with around 30,800 deliveries – behind the Tesla Model 3. “Now that the order backlog has been processed successfully, the model from the segment below the ID.3 is available to order again in Germany and will gradually be rolled out in other European markets,” VW now announced.

There are no changes to the e-Up Style ‘Plus’ drive technology: The electric drive system continues to produce 61 kW, the maximum torque is 210 Nm. The e-Up is equipped with the CCS charging socket as standard in this configuration. With the maximum 40 kW charging power, a charging process to 80 per cent takes around 60 minutes. With alternating current, an 80 per cent charge with 7.2 kW power takes a little longer than four hours. The battery holds 32.2 kWh and VW claims a max WLTP range of up to 258 kilometres.

VW did not specify when the vehicles ordered will be delivered – but for the German EV subsidy, which is limited until 31 December 2022, a possible delivery date would be important information for customers.

General Motors to pick up Bolt production in April

Nissan is investing in EV production in the USA

4 Kommentare zu “Volkswagen to bring back the e-Up”