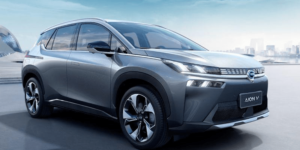 GAC Aion, the electric car offshoot of China’s GAC Group, has completed the expansion of its existing production facility to an annual capacity of now 200,000 electric cars. When the second plant comes on stream in December, production capacity will rise to 400,000 cars per year.

The first plant started production in April 2019 when GAC unveiled the Aion sub-brand for its electric cars. The manufacturer began making internal combustion cars in 1955, which now run under the GAC Trumpchi brand. The GAC brand and the two sub-brands belong to the Guangzhou Automobile Industry Group from the southern Chinese metropolis of Guangzhou.

In April 2021, GAC Aion announced that it would invest around 500 million yuan to expand the plant’s capacity. This expansion has now been completed. Some of the new facilities have already gradually been put into action as GAC Aion built 123,660 vehicles in 2021. Before the expansion the plant only had a capacity of 100,000 units.

The construction of a second plant for another 200,000 electric cars per year should be completed by December this year. While the locations of the plants are not specifically mentioned, they are very likely to be in or around Guangzhou.

GAC Aion was spun off as a separate brand from GAC in November 2020, replacing the previous GAC New Energy division. The brand has since launched five all-electric models: the Aion S, Aion LX, Aion V, Aion Y and Aion LX Plus.

Since 5 January, the Aion LX Plus has been delivered with an NEDC range of around 1,000 km. This model was presented at the Guangzhou auto show in November. The battery has an energy content of 144.4 kWh and an energy density of 205 Wh/kg. In its sales figures, GAC Aion does not break down sales by individual model, but in January as a whole, the company sold 16,031 vehicles – 118 per cent more than in January 2021.

GAC Aion, the offshoot of the Chinese GAC Group, has put its second plant into operation – and even a little faster than planned. Announced in January, the second production facility with an annual capacity of 200,000 vehicles doubles the total capacity of GAC Aion together with the expanded first plant to now 400,000 electric cars annually.

In the future, multi-shift operation is expected to further increase the combined production capacity up to 600,000 units per year, GAC Aion announced via its WeChat account. Such a multi-shift system could soon become necessary, as in September GAC Aion sold more than 30,000 vehicles in one month for the first time. Extrapolated to twelve months, this would correspond to 360,000 vehicles – which is already quite close to the current production capacity.

It is not yet known how quickly GAC Aion will be able to scale up production in the plant that has just gone into operation.

Porsche to reinvest in Zuffenhausen plant