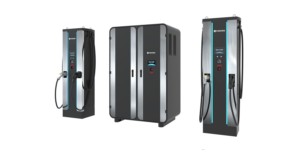 Shell has been deploying the first Phihong columns in Hong Kong since the end of December 2021. This deployment is already based on the framework agreement that was signed at the time but has only now been made public. The company’s have not yet revealed more information about the number of units and the financial scope of the framework agreement.

Phihong has a broad portfolio of EV charging solutions, such as a mobile wallbox with up to 16A output current, or AC wallboxes and charging columns ranging from 7.7 to 22 kW for use in a wide range of markets with Type 1 and Type 2 connections. The 30 kW DC solution is a type of wallbox with 2 cables, the solutions with 60 kW (DS series) and more are only offered as free-standing pillars.

Of the top model with 360 kW – referred to by the company as the DO series – there are two versions. Both the air-cooled and liquid-cooled versions are specified with a maximum output current of 500A. Whether their behaviour differs over the duration of the charging process is not clear from the information on the homepage.