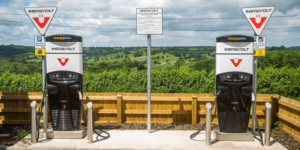 The new owner EQT Infrastructure says they have committed to invest in the accelerated roll-out of InstaVolt charging points in order to build a network of 10,000 fast charging points across the UK by 2032. The exact amount EQT paid for InstaVolt and the announced investment has not been revealed, only that it will be “significant”.

EQT Infrastructure specialises in energy issues as an investor and now wants to bring its “in-depth knowledge of the energy transition and sustainability” to InstaVolt. EQT believes that the charging provider has a strong market position. So far, the 700 charging points are installed in the UK, but EQT also plans to expand abroad.

“The future is electric and InstaVolt is critical to the roll-out of electric vehicle charging infrastructure across the UK,” says Anna Sundell, partner and head of EQT Infrastructure’s UK advisory team. “We are excited about supporting InstaVolt in the next phase of growth and for EQT to play its part in decarbonizing the transportation sector and driving the transition towards net zero in the UK and beyond.”

InstaVolt CEO Adrian Keen added: “InstaVolt has set a standard in the UK for driver experience and infrastructure, and now with support from EQT, we are in a unique position to accelerate that target and replicate our model in other geographies, transitioning the business into the next phase of growth.”

InstaVolt builds and operates DC charging points, using equipment such as charging columns from Australian manufacturer Tritium. The charging points are mostly located at retail, food, beverage and gas station locations so users can combine charging with other everyday activities such as shopping. Current partners include McDonald’s, Costa Coffee and Booths.

In September last year, InstaVolt published a pledge to install 10,000 electric vehicle chargers across the UK by 2030. At the time, the pledge seemed quite ambitious considering the company’s current capacity. Now it seems, InstaVolt has upped their capacities and put their goal back two years to 2032.