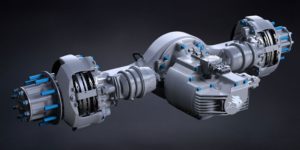 US American drive system builder Cummins has announced its intention to acquire supplier Meritor for around USD 3.7 billion. The transaction still has to be approved by shareholders and is expected to be completed by the end of 2022.

Specifically, an agreement calls for Cummins to pay $36.50 in cash per Meritor share, for a total transaction value of about $3.7 billion, including debt assumed and net of cash acquired. Meritor’s board of directors has unanimously approved the agreement with Cummins and recommends that its shareholders vote in favor of the transaction at the special meeting of shareholders to be called in connection with the transaction.

Through the transaction, Cummins expects to strengthen its powertrain component offerings and accelerate the development of electrified powertrain solutions. “Adding their strengths (Meritor) will help us address one of the most important technology challenges of our time: developing commercially viable zero-carbon solutions for commercial and industrial applications,” says Tom Linebarger, chairman and CEO of Cummins. He adds, “We expect to accelerate growth in Meritor’s core axle and brake businesses by leveraging our global footprint.”

The Meritor acquisition is also expected to be immediately accretive to Cummins’ adjusted earnings per share, generating approximately $130 million in annual pre-tax synergies by the third year after closing. Cummins intends to finance the transaction with a combination of cash on its corporate balance sheet and debt.

Cummins has scheduled a conference call with analysts and investors at 9:30 a.m. EST (3:30 p.m. CET) today to discuss the transaction. Participating will be Tom Linebarger, chairman and CEO of Cummins, as well as Mark Smith, chief financial officer of Cummins, and Chris Villavarayan, CEO and president of Meritor.

Meritor has more than 110 years of history. Headquartered in Troy, Michigan, the company employs more than 9,600 people and serves commercial vehicle, trailer, off-highway, defense, specialty vehicle and aftermarket customers worldwide, according to a release.