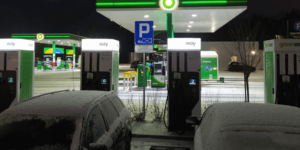 The charging infrastructure provider GreenWay, which has so far been active primarily in Poland and Slovakia, has secured investments totalling 85 million euros. The money is to be used, among other things, for the further expansion of GreenWay’s charging station network.

GreenWay signed a funding agreement with Helios Energy Investments and Generation Capital (GC). The company is also receiving support from existing investors Janom a.s. and Neulogy Ventures. According to the company, this is the largest known investment in electric vehicle charging infrastructure in the Central and Eastern European region.

“This investment puts us on a solid financial footing at a time when the market is maturing and beginning to consolidate,” says Peter Badík, co-founder and CEO, GreenWay Holding. “By remaining independent, we will be flexible and well positioned to take advantage of the opportunities these changes bring.”

Specifically, the capital will be used to deploy more charging stations, expand the network and strengthen the company’s technical and IT capabilities. As part of the funding round, GreenWay was advised by Rothschild & Co (fundraising) and AKF Legal and Wozniak Legal (legal), while Helios and GC were advised by KPMG (finance) and WKB (legal).

“The investors’ commitment will enable us to significantly accelerate the development of public charging infrastructure,” added Rafał Czyżewski, CEO, GreenWay Poland. “We also want to deepen cooperation with companies and become the partner of choice for organizations that want to switch to electric mobility and need comprehensive support to do so.”

GreenWay says its network consists of more than 488 charging stations, mainly fast and high-power chargers, and nearly 30,000 registered customers. GreenWay operates charging infrastructure for leading brands and OEMs such as IKEA, Żabka, InPost, Mercedes, Kia, according to the statement.