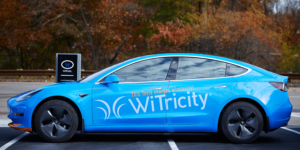 WiTricity, a provider of wireless charging systems for electric vehicles, wants to offer owners of selected electric car models a retrofit package for inductive charging. A beta version is planned for the U.S. later this year – including for a Tesla Model 3.

After the beta, the solution called WiTricity Halo Charging with 11 kW power will be more widely available in 2023, according to the company. WiTricity does not provide details on the scope of the beta test, however.

“Our research has shown us that consumers want wireless charging for their EVs,” said Alex Gruzen, CEO of WiTricity. “WiTricity has focused to date on enabling automakers with factory-installed EV wireless charging, and we’re seeing the first of these vehicles launching in Asia. Now, we want to bring our WiTricity Halo Charging solution to customers who have already purchased their EV by offering a complete upgrade solution.”

This upgrade package includes three components: the power receiver, which is installed on the vehicle; the wall box, which connects to the power supply; and the charging station, which is installed on or in the ground. Not only in terms of charging power of 11 kW, but also in terms of efficiency, the solution is said to be comparable to today’s wired AC systems, the manufacturer promises.

Specifically, the system will initially come for the Tesla Model 3, with a suitably equipped vehicle in use since October 2021. A Ford Mustang Mach-E is currently being converted, and “other vehicles are in the pipeline.” Beyond the Tesla and Hord, however, WiTricity does not name any specific models. The company plans to announce more details later this year. “The final decision on which models will offer upgrades has yet to be determined and is based on customer demand, technical feasibility and automaker support,” the release says. It does not mention whether the solution will be offered outside the U.S. at a later date.

“Our successful upgrade of the Tesla Model 3 is resonating with consumers as an easier, more convenient way to charge their EVs,” Gruzen says. “With the WiTricity Halo solution, you just park and walk away, knowing you will return to a fully charged car.”