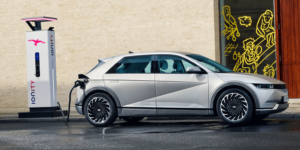 After every charge, the corresponding amount of green electricity is fed into the grid from one of the public charging stations installed throughout Europe.

Hyundai adds it was committed to using so-called Guarantees of Origin (GO) issued by an independent registry that authenticates the green origin of each unit of power produced by regenerative energy providers. In Hyundai’s case, the power will come from the wind.

“By working with ‘GO’ certificates, we guarantee that 100 per cent of the energy consumed during each charging process is fed into the power grid as electricity from European wind turbines,” explains Jörg Reimann, CEO of DCS. “That makes the demand for green electricity visible on the market and helps to pave its way.”

Indeed, Hyundai, in today’s statement, said, this way, their drivers would also contribute to clean and sustainable mobility by increasing the share of renewable energy generation on the European market.

This includes access to the Ionity high power charging network in which the Korean company holds a stake. Hyundai had recently followed its partner Kia in offering preferential Ionity tariffs for clients opting for a Hyundai electric car as reported. Those opting for the latest Ioniq 5 get the Premium package for free. All others may subscribe and pay a monthly fee starting at 13 euros, allowing charging at a reduced rate of EUR 0.27 per kWh in European markets.

Ionity now operates 1,600 high-power charge points across 24 European countries. The Hyundai Ioniq 5 is among a growing number of EVs that can take the full charging power of up to 350 kW.