The Israeli battery developer StoreDot has presented its strategic technology roadmap ‘100inX”. Within the next ten years, it plans to deliver battery cells that can recharge energy for a range of 100 miles (160 kilometres) in just two minutes.

In 2024, StoreDot wants to bring the battery cells it is currently developing into series production together with EVE Energy. These should be able to recharge power for just those 100 miles or 160 kilometres in five minutes. In the next step, this duration is to drop to three minutes by 2028, before only two minutes are to pass in 2032. However, StoreDot only ever refers to the 100 miles. Of course, the amount of energy that needs to be recharged depends primarily on the consumption of the vehicle.

The technology targeted for 2024 is lithium-ion batteries with a silicon-dominant anode – that is known. These cells are expected to have an energy density of around 300 Wh/kg. In 2028, solid-state cells will be introduced, which will not only enable even higher charging capacities but also offer an even higher energy density of 450 Wh/kg. StoreDot speaks of “to be released in 2028”, so the technology is probably already in development. 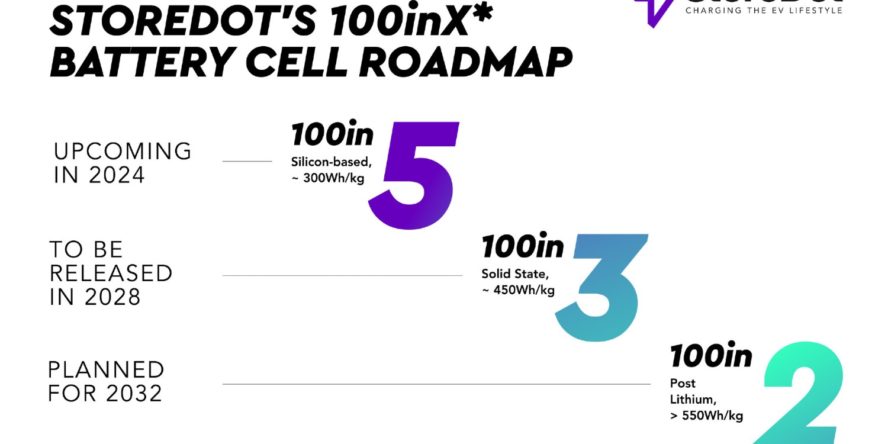 The technology for 2032 looks different, here it only says “planned for…”. The two-minute charging time for 100 miles – hence the name of the strategy “100inX” – is to be achieved with a post-lithium technology that is to offer an energy density of more than 550 Wh/kg. StoreDot did not provide additional technical details about the technology, however.

“It’s absolutely crucial that we give global automotive manufacturers a clear, realistic and hype-free roadmap for the introduction of our fast-charging battery technologies,” says StoreDot CEO Doron Myersdorf. “After intense development of our silicon-dominant chemistries we will be mass-production ready by 2024, delivering a transformative product that will overcome the major barrier to the widespread adoption of electric vehicles – charging times and range anxiety.”

The XFC cells, which the company also calls “100in5” in line with its new strategy, are already being tested by a number of carmakers. StoreDot plans to offer this technology as pouch cells and as round cells in 4680 format.