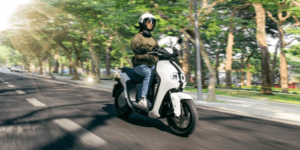 Yamaha is launching the new NEO’s electric scooter in the 2.5 kW power class in Europe at prices starting at 3,099 euros. Deliveries of the new NEO’s to European Yamaha dealers will begin in June 2022.

According to the manufacturer, the NEO’s is Yamaha’s first high-volume electric scooter that is equivalent to a 50-cubic scooter. “The NEO’S is aimed at answering the needs of Europe’s electric scooter market, and the model itself will be manufactured by group company Yamaha Motor Vietnam Co., Ltd,” Yamaha writes. Yamaha also plans “to release the model to ASEAN markets in stages”.

The series is designed for urban mobility, consequently the focus was not on a high range for the expected short distances. The eight-kilogram battery offers a range of 37 kilometres; with an optional second battery, the range increases to 68 kilometres. The battery can be charged when installed, but can also be removed for convenient indoor charging – here the low weight has a positive effect. In standard mode, the drive has an output of two kW, in eco mode it is limited to 1.58 kW.

The drive is provided by the new generation Yamaha Integrated Power Unit (YIPU). The brushless electric motor is air-cooled and designed as a direct wheel hub drive. The Japanese company expects this to provide strong torque, particularly smooth running and yet powerful acceleration.

According to the press release, the electric scooter is priced at 3,099 euros. However, in the German press release, there is an additional charge of 225 euros, resulting in a recommended retail price of 3,324 euros.