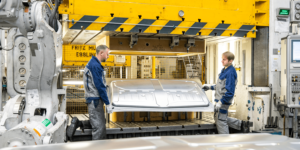 Munich-based solar car developer Sono Motors has announced that it will soon start the series testing phase for its Sion. The company is currently building a fleet of series validation vehicles for the Sion’s testing programme. The final design of the electric car is expected to be unveiled this summer.

According to the company, these test vehicles consist of series components and correspond to the “expected final design” – changes are of course still possible if the test drives do not produce the desired result. The fleet of 37 3rd generation bodies consists of 16 complete vehicles and 21 test vehicles.

At the beginning of the year, the development team had completed the prototype phase and finalised the components and vehicle parameters. The pre-series or validation vehicles built on this basis are to undergo “uncompromising practical tests under extreme conditions in Europe and the USA” – from the optimisation of solar technology and the classic testing of new vehicles in different climatic zones to the safeguarding and tuning of the chassis on test tracks and in road traffic. Crash tests are also on the agenda.

Jona Christians, CEO and founder of Sono Motors, unsurprisingly sees the start of the series testing phase as “another step on our way to climate-friendly mobility of the future”. “Getting from the first concept in a garage to this point was only possible with hundreds of engineers working tirelessly every day on both the Sion and our Sono Solar technology,” says Christians. “The fleet of validation vehicles now follows our successful 2nd generation prototype program and paves the way for planned series production next year.”

Sono says it is working with Bertrand and Thyssenkrupp Automotive Body Solutions to manufacture the validation fleet. “Both partners have not only extensive expertise in automotive engineering but also the necessary infrastructure and capacity to produce our test cars quickly and with high quality,” says Sono CTO Markus Volmer.

The public premiere of the Sion in its final design is planned for summer 2022. According to current plans, series production is to start in 2023. Sono also confirms in the statement that the Sion will be launched at a “planned gross price of 28,500 euros”. The solar electric car features a 54 kWh LFP battery and 458 solar cells integrated into the body.

Sono Motors has been listed on the US stock exchange Nasdaq since November 2021. The capital from the IPO is to flow into the development, preparation for series production and market launch of the Sion.