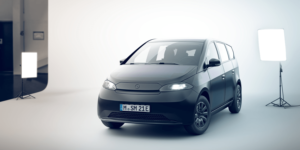 Sono Motors plans to offer 10 million ordinary shares in its planned US IPO. The German solar car start-up says the placement price per share is expected to be between US$14 and US$16. Sono has applied to list its common shares under the symbol ‘SEV’.

The number of shares and the placement price will result in the company’s market capitalisation, which would be between 140 million and 160 million dollars (around 120 to 138 million euros) at the time of the stock market debut. In addition, the Munich-based solar car developer states that it intends to grant subscribers a 30-day option to acquire up to 1.5 million additional ordinary shares at the public offering price. It is not clear from the current announcement exactly when Sono Motors will enter the US stock market.

Preparations for the Wall Street listing have been underway for some time. In October, Sono Motors announced that it had filed an official registration statement with the US Securities and Exchange Commission (SEC) for the planned IPO of its ordinary shares. Berenberg and Craig-Hallum are acting as the global coordinator or co-manager for the offering.

Sono Motors is known to be planning to start production of its Sion solar car at contract manufacturer National Electric Vehicle Sweden (NEVS) in 2023. Exactly 15,000 private customer reservations have now been made for the model. The average down payment is around 3,000 euros. Sono Motors plans to raise the current net price of the Sion from 21,400 euros to 23,900 euros (net prices in each case), either on 15 November or as soon as 16,000 reservations are reached – whichever comes first.

There was recently some confusion about the contractual status between Sono Motors and NEVS: although Sono Motors announced as early as 2019 that it would have its solar electric car produced by NEVS at its Swedish site in Trollhättan, there is apparently no binding production agreement on this to date. The lack of a final contract was made public by NEVS boss Stefan Tilk to the Swedish daily newspaper Dagens Nyheter at the end of October.

In response to a request for comment on NEVS CEO Tilk’s current statements, Sono provided electrive with an update on the current cooperation. Sono refers to the contract manufacturer as a “production partner”, but did not say whether there is a contractually fixed production agreement.

NEVS recently made headlines since it is an Evergrande subsidiary, and is therefore directly affected by the financial and related existential worries of the highly indebted Chinese real estate giant. The Sweden-based company recently had to lay off 300 employees. NEVS is currently looking for a new owner. Sono Motors already told elective in August and again at the end of October that “the production of the Sion is currently not affected by the restructuring and the preparations of the production facilities for the pre-series production in 2022 and the Sion series production in the first half of 2023 are already running according to plan.”

The announced US IPO of the German solar electric car start-up Sono Motors is becoming concrete: Sono Motors’ ordinary shares are to start trading today on the Nasdaq Global Market under the symbol “SEV”. The solar electric car startup is placing 10 million shares at a price of US$15 each. In addition, the company is granting the underwriters a 30-day option to purchase up to 1.5 million additional shares of common stock at the public offering price.