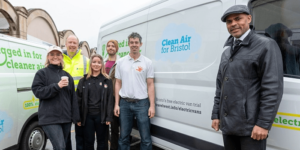 Bristol City Council offers businesses the chance to trial electric vans and cars for free for up to two months. The scheme is fully funded by National Highways and will run for two years.

The scheme was launched in June two years ago with an overall budget of £936m between 2020 and 2025. Already at the time, National Highways had approved Bristol to take part. Now, Bristol City Council has received £3.2m to run the trials.

Businesses, charities and voluntary organisations in and around Bristol may apply through Travel West to borrow an EV. There is a range of vehicles, with full insurance included, as part of the scheme. As well as a choice of small, medium and large vans, the fleet comprises taxis and electric cars suitable for smaller businesses.

The scheme’s launch comes ahead of Bristol introducing a Clean Air Zone in late summer. This means that older and more polluting vehicles will have to pay for entering Bristol’s city centre. EVs, including those provided through the scheme, would be exempt from charges. However, this also makes the switch somewhat urgent.

Mayor of Bristol Marvin Rees admitted that for organisations running larger vehicles, making the change to electric was “a big challenge not just in terms of costs but also developing knowledge about the makes and models available, charging practicalities, driving distances and even the driver training needed to get the most out of battery capability.” The new scheme was then “a chance to investigate the possibility of switching to electric without committing huge funds upfront.” He also pointed to support and guidance from experts at Bristol City Council.

The advisors will also base their recommendations on data gathered in real-life use. Each EV in the scheme is fitted with a device that provides detailed journey and charging data, helping organisations understand how they’ve used the vehicle. This will help them make an informed decision about whether to purchase one (or more) vehicles for their fleet, explains the Council.

“We’re really pleased that over 300 organisations have already signed up for more information on the scheme and encourage others to find out more on the TravelWest website,” added the Mayor.

Andrew Page-Dove, South West Regional Director for National Highways, said: “We’re working with councils across the country to encourage businesses to make the switch to electric vehicles, and we expect many more to start using electric vehicles when they experience the savings possible.” At launch, these scheme was launched in 2020″>reportedly included Councils in Leeds, Coventry, Kent, Nottingham, and Sheffield.

Some limited additional funding is available to pay for charge points for the early participants who commit to buying at least one electric vehicle after their loan ends. The Council will pay an organisation replacing a diesel vehicle with an electric one after their loan ends up to £1,000 per charge point. This is in addition to the Government’s Office for Zero-Emission Vehicles (OZEV) grant which covers up to 75 per cent of the total costs of the installation of EV charge points.

The British Government this week has also extended the Plug-in Van Grant scheme to run until 2025.