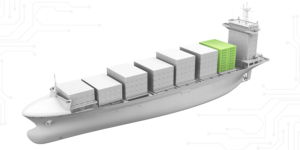 The US start-up Fleetzero has developed an interesting concept for the electrification of shipping. Electric ships are to receive batteries stowed in freight containers and make more stops at smaller ports, where the empty batteries are handed in and only so many new ones are picked up to take the electric ships to their next destination.

With FleetZero’s concept, smaller ports will effectively act as charging stations and exchange points. The company’s container and battery-swapping solution is aimed at shipping between closer marine ports and inland waterways.

So far, FleetZero has raised 3.5 million US dollars and wants to start converting ships in 2025. The company aims to convert existing diesel ships to battery-electric while developing the MVE7, an electric ship designed for trans-pacific cargo delivery.

The founders, Steven Henderson and Mike Carter are graduates of the US Merchant Marine Academy and grew up in and around the shipping industry. Henderson explains the logic behind the FleetZero solution: “The weird economics of this is that the more ships you have, and the more stops you have, the lower your cost is. The key is to make the batteries swappable — this wouldn’t work for a plug-in vessel.”

Henderson elaborated on the problem addressed by the FleetZero solution: “If a ship has enough batteries to go a thousand miles, then unless you’re going exactly that distance every time, you either have too much or too little capacity. And if you only have one large ship that has to swap out batteries at each end, you must keep twice the number of active batteries around — a set to swap out at each destination. But if you split the same capacity among several smaller ships and add more possible stops, suddenly it takes far less battery capacity to move the same amount of cargo.”

Fleetzero says they have designed the batteries for marine environments, focusing on safety, fire prevention and durability. Each storage pack has 2 MWh of energy, housed in a low-height container of 20 feet by five feet with a weight of eight tonnes.

The company says the batteries packs have been made exceptionally rugged to withstand inversion, shock, and excess g-forces. According to The Maritime Executive, Fleetzero plans to manufacture the improved LFP battery domestically in the USA at a facility located in Birmingham, Alabama, with initial application in American vessels. FleetZero says that their container battery system has received approval for vessel propulsion from the American Bureau of Shipping (ABS).

According to TechCrunch, local governments and port managers presented with the FleetZero concept are enthusiastic about the idea of bringing in new and regular business. The company’s next task is to test the shipping route and battery-swapping process from start to finish. With the required regulatory approvals, the company aims to begin converting vessels in 2025, and if all goes well, FleetZero could begin commercial operations that same year.