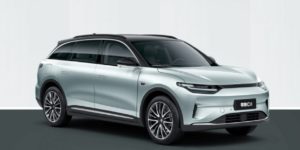 The Chinese electric car manufacturer Leap Motor has filed for its IPO in Hong Kong and plans to launch eight new models by 2025. It is estimated that the listing on the Hong Kong stock exchange could bring the company at least one billion US dollars.

The equivalent of around 900 million euros is to be used, among other things, to drive the development of new models. Leap Motor (whose full name is Zhejiang Leap Motor Technology) plans to launch one to three new models per year, with the aim of offering a total of eight new models by 2025.

According to the CN EV Post, the version of the prospectus published on the website of the Hong Kong Stock Exchange does not mention the number of shares or the expected valuation. The figure of one billion dollars dates from last October, when a person familiar with the plans quoted this sum to Bloomberg. So the figure is fraught with uncertainty.

Leap Motor was founded in 2015 and currently sells the T03 small car, the S01 coupe and the C11 SUV. Later this year, it plans to launch a model called the C01, an e-sedan that is around five metres long. According to reports, the C01 and the C11 (as a competitor to the MG Marvel R) could also be launched in Europe – but the manufacturer has not yet confirmed this.

For the period from 2023 to 2025, Leap Motor is planning a total of seven new models, two of which are listed in the same category as the coupe, the compact car and the upcoming sedan, according to a chart. Four models will probably come as SUVs in different sizes, plus a van or MPV is planned.

The company delivered 43,748 electric cars last year and 11,520 in the first two months of this year. Since the company has not yet commented on a possible export, Leap Motor is far less known in this country than manufacturers such as Nio, Xpeng or Aiways. However, Leap Motor is one of the best-funded EV start-ups from China, having raised more than 11.5 billion yuan or 1.63 billion euros in previous financing rounds.

Maserati to go fully electric by 2030