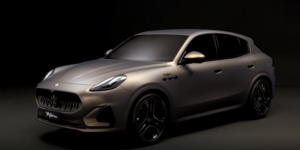 Maserati has unveiled its new Grecale SUV model, which will also be available in an all-electric version from 2023. The electric car, called Grecale Folgore, will get 400-volt technology and a battery pack with a capacity of 105 kWh.

Apart from the dimensions – the Grecale is 4.84 metres long, 2.16 metres wide including wing mirrors and 1.67 metres high – Maserati hardly mentions any further information on the electric version and its drive in the announcement for the Grecale’s premiere. Only the 400-volt system, the 105 kWh battery (no indication whether gross or net) and the maximum torque of 800 Nm are mentioned.

This is likely to be an electric all-wheel-drive model with at least two drives – the electric coupé GranTurismo Folgore, which will also arrive in 2023, will get about three electric drives. Maserati does not mention a system output, but InsideEVs estimates it at “probably over 350 kW” in view of the torque.

The range is also not yet known, but an estimate in the range of 500 WLTP kilometres should be realistic. With 105 kWh, the BMW iX xDrive50 also has a range of up to 561 kilometres according to WLTP. At the front, the Grecale Folgore wears the large and shaped front grille of the combustion models, which certainly does not provide optimal aerodynamics.

In terms of charging performance, the Maserati should also be on a par with the iX – at least on paper. This is only logical, because the CCS system is designed for a maximum of 500 amperes, so no more than 200 kW charging power is possible at 400 volts. The question is how long the Grecale Folgore can maintain this level before it shuts down – the size of the battery should allow for a long plateau, but this is not confirmed. Maserati does not mention the charging power or the charging time to 80 per cent.

The fact that the Grecale Folgore – unlike the GranTurismo – gets a 400-volt system is due to its platform: it is not yet based on the STLA platforms from Stellantis, which have been optimised for e-drives and support those 800 volts of system voltage in the larger versions. Since the Grecale is also available as a combustion engine with four- and six-cylinder engines, it is based on the Giorgio combustion engine platform and is thus related to vehicles such as the Alfa Romeo Stelvio or the Jeep Grand Cherokee.

Therefore, not only the proportions of the body follow the combustion engine model, but also the interior. There is a 12.3-inch cockpit display, an equally large infotainment display and an 8.8-inch touchscreen for climate control. The space inside seems rather conventional. However, as with previous models, Maserati seems to be relying on familiar values such as high-quality leather and also open-pore wood finishes.

A possible price for the electric version of the Grecale and the exact market launch in 2023 are not yet known. As reported, Maserati wants to become a pure electric vehicle brand by 2030.