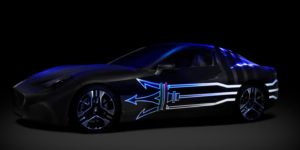 With the Italian car manufacturer Maserati, another Stellantis brand has announced its transformation into an all-electric car manufacturer. By 2025, Maserati will offer a fully electric version for all of its models and from 2030 will only sell electric cars.

This makes it the first Italian luxury car brand to make this transition, according to Maserati. The Italian companys’ electrification offensive will go under the label Maserati Folgore, the Italian word for lightning. This week, pictures of a prototype of the electric version of the GranTurismo sports coupe during winter test drives had been published by some media. Some of the reports said that the electric coupé would be called Folgore. Now the brand clarifies that Folgore will be the name of the entire electric series.

This will begin in 2023 with the aforementioned electric version of the GranTurismo, which will still have the brand-typical air intake with the trident logo of the combustion models at the front, but will do without suggested tailpipes at the rear. The same year will also see the launch of the Folgore version of the Grecale SUV – the combustion engine model of which will be launched this year.

Electric versions of the MC20 super sports car, the Quattroporte sports saloon and the larger Levante SUV model will follow by 2025. For the time being, however, these series are all still available in parallel as combustion engines. The manufacturer does not yet specify what the purely electric model portfolio will look like from 2030. Only this much: “All new models of the brand will be developed, designed and produced 100 per cent in Italy and will adopt electric powertrains to bring great innovation and high performance, both typical of Maserati’s DNA.”

In January this year, Maserati had announced its entry into Formula E for the 2022/23 season. At the beginning of March, parent company Stellantis once again tightened its electric targets with its new “Dare Forward 2030” strategy.