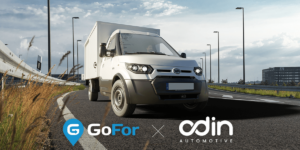 Odin Automotive is entering North America after acquiring the StreetScooter van business from Deutsche Post/DHL. The company has partnered with delivery company GoFor to deploy its electric transporters in the US and Canada from the second quarter of 2022.

The partnership provides GoFor with a turnkey solution for electric deliveries, and the company also secures preferential access to Odin’s StreetScooter production capacity. For Odin, the agreement provides a binding right of first refusal to provide certain electric vehicles for GoFo’s delivery service, starting with up to 3,266 vehicles planned by the end of 2023.

The collaboration with Odin makes GoFor one of the first Fleet-As-A-Service providers in North America, it said in a statement. The company’s network reportedly consists of more than 10,000 independent drivers as well as GoFor franchise fleet owners. It said GoFor chose Odin as its preferred vehicle partner “because of the range’s proven track record of more than 20,000 electric delivery vehicles on the road over the past seven years and because of the company’s comprehensive range of electrification services”.

“This partnership brings together two pioneers in sustainable last-mile delivery who both understand that the world can’t continue down the same path, rushing to deliver ever faster, no matter the consequence to communities or the environment,” explains Ian Gardner, CEO of GoFor. “This union is key to living up to our Renewable Delivery commitment to deliver better through carbon-negative solutions and fast, reliable, low-cost delivery.”

Odin had earlier this year acquired the production rights for StreetScooter Engineering (StSE) eLCVs from Deutsche Post DHL in Germany. Deutsche Post DHL Group did not disclose the purchase price in the announcement at the time. In return, the company became a minority shareholder in Odin. Production under the new management started in February this year.

Maersk & Einride to partner on electric trucking in USA