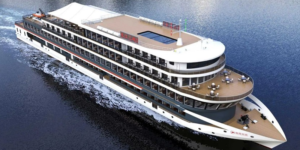 Said to be the largest electric cruise ship in the world, the ‘Yangtze River Three Gorges 1’ has started its maiden voyage in Yichang in Hubei province. The ship is 100 metres long, 16.3 metres wide and has room for 1,300 passengers.

According to a number of different publications reporting from Chinese media, the electric cruise ship was developed by China Yangtze Power, a subsidiary of China Three Gorges Corp, and the Hubei Three Gorges Tourism Group. The ship’s development involved research institutes including China Shipbuilding Industry Corp and Beijing University of Technology.

The ship was built at a cost of 150 million yuan ($23.5 million). The project was sponsored by the Chinese Ministry of Industry and Information Technology and the Ministry of Transport to further clean energy and green transportation while the pilot project aims to strengthen the country with independent intellectual property rights.

Officials at the launch said that Yichang is striving to become a clean energy capital and should help Yichang to grow as a world-famous tourism city, as well as serving the green development of the Yangtze River Economic Belt.

The Yangtze River Three Gorges 1 and is equipped with Ningde Times batteries, with 15 independent battery packs adding up to around 7.5 megawatt hours. The ship is supposed to be able to travel 100 kilometres on a single charge. According to Zhang Xingliao, general manager of China Yangtze Power, the power to operate the watercraft comes from the Three Gorges Dam, which is located in the region. He says that the project developers have reduced the equipment failure rate and operation and maintenance cost with the use of an automatic control system and intelligent power management system.

The ship is meant to be a new star in the world of tourism and shipping. The Yangtze River Three Gorges No. 1 has applied the world’s first “high-voltage + low-voltage” charging scheme, and at the same time adopted the ship’s DC grid distribution system, full rotary rudder system, large ship DC inverter central air-conditioning system.

After the cruise ship has been put into operation, Chinese media reports write that it will be mainly used for tourism routes such as Two Dams and One Gorge, Yichang Yangtze River Night Cruise and Three Gorges Boat Lift. Onboard the ship, passengers are provided with leisure activities and entertainment, tourism and sightseeing services. The ship is also being envisaged for activities such as the Yichang city riverfront tour, high-end wedding celebrations, international academic conferences, business receptions, product launches, corporate events and variety and entertainment shows.