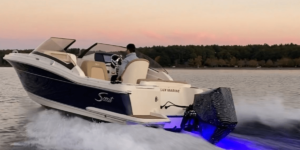 In the USA, Flux Marine, a developer of all-electric outboard motors and battery systems for watercraft headquartered in Bristol, Rhode Island, announced it raised $15.5 million (14.03 million euros) in an oversubscribed Series A funding round led by Ocean Zero.

Flux Marine says it will leverage the new funding to expand manufacturing, recruit additional talent, and continue to develop its technologies. The company boasts a lineup of 15HP, 40HP, 70HP and 100 HP electric outboard models. While the range of motors powering marine vessels is dependent on hull design and operating conditions, Flux Marine says that its 100 HP outboard mounted on a 22-foot dual console hull can deliver top speeds nearing 35 knots and a range of over 75 nautical miles on a single charge.

The oversubscribed Series A round was led by Ocean Zero LLC. This fund was created by TED Conferences head Chris Anderson and technology editor Stephen Petranek to invest in the acceleration of alternative energy solutions for consumer and commercial marine transportation. This financing round also saw participation from Boost VC and Winklevoss Capital, and Flux Marine reports that it saw majority participation from previous seed and angel investors.

“Ocean Zero invests in innovative young companies that can make a breakthrough difference in decarbonising transportation on the world’s oceans, rivers and seas,” said Stephen Petranek, Operating Partner for Ocean Zero LLC. “Commercial shipping by sea and recreational boating produce more CO2 emissions each year than all the world’s airlines combined,” he revealed.  “Flux Marine can make a significant impact on climate change if even a fraction of the 800,000 outboard engines sold each year can be replaced by fully electric motors,” Petranek pointed out.

Flux Marine says that recreational boating releases vast amounts of particulates into the atmosphere and discharges as much as 150 million gallons of unburned gasoline into rivers, lakes and oceans annually. The company’s mission is to provide performance products through sustainable technology to significantly reduce these pollutants. The company only just debuted its line of all-electric outboards at the 2021 Newport International Boat Show. Here Flux Marine won two best new products awards.